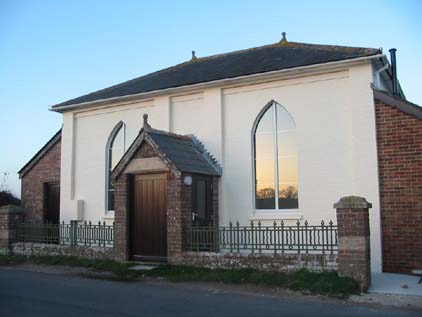 It is built in brick, subsequently cream colourwashed, with a slated roof and the original brick paved floor was replaced by boards and joists in 1870.

A Stable was added in about 1886, but has since been removed.

A room at the west end, the entrance porch and some well designed front railings all appear to have been added since the original building.

In 1870 it was described as 'placed in the midst of considerable desolateness, a red brick chapel'.

You can see a Plan of it below. Click image to enlarge in a new tab
The Bere Heath Methodist Society was formed at some time between 1815 & 1829 and meetings were held in the house of Benjamin Romain before the Chapel was built.
The first Trust was formed in 1849 consisting of 12 members.
Mr Robert Hoare gave a site and the new Chapel was opened on 24th October 1850. In 1889 only two of the original Trustees were still living, so a new Trust was formed with 13 additional members, making 15 in all.
The Trust was again renewed in 1948 when only 3 Trustees were still living.
In 1939 £50 was spent on repairs and in 1944 the original rostrum was removed and replaced by a pulpit and communion rail.


A Short History of the Society

When the Society at Bere Heath was first formed I am not able to say, but from various sources it would appear to be some time between 1815 and 1829.
In the Tolpuddle Martyrs' Memorial Chapel, there is a copy of a Weymouth Circuit Plan for December 1829 to February 1830, and Bere Heath was one of the preaching places supplied.

A book loaned by Miss Jane Wilcox reveals some very interesting information concerning the early days of the Society.
Before the chapel was built, they met in the house of Mr Benjamin Romain, of whom it is said that he was a Local Preacher, Class Leader and later Chapel Steward "faithful to the Church of his choice."
The first "Trust" was formed in 1849, and the following were members of it: Benjamin Romain, John Ricketts, George Romain, Levi Riggs, Henry Ainsworth, George Riggs, Isscher Day, George Cole, Edward Galpin, Eli Savoury, William Hammett, Robert Hoare.

This book also gave us some fifty years of the history of the Chapel, which is here related.
The building was erected in 1850 on a site kindly given by Mr Robert Hoare, at a cost of £120.18s.8d voluntarily contributed by members of the Society, and friends in the Dorchester Circuit.
The Superintendent at that time was the Rev. J. Stevens, and the Chapel was opened by the Rev. J. Smeeth of Poole on the 24th October, 1850.

The building was then described as having "a cold brick floor, open rail seats, and a high pulpit lighted with candles." In 1870 a new floor was laid, and new seating installed; this and other renovations cost about £35.
As far as can be ascertained the stable was added in the year 1886.
This, along with other renovations incurred the further expense of £20.
Three years later the Chapel deeds were renewed, and a stove installed.
About the same time Elizabeth Foster presented a clock to the Society.

It was found in 1889 that only two trustees were surviving so a new trust was formed including the two former members; William Hammett and J.W. Barrett and the following new members:

William Snook, William Crocker, Robert Thorne, James Henvill, Benjamin Baker, Edwin Shave, Elias Joiner, Alphonso Wolff, Gideon Wright, George Sanders, Henry Marsh, Walter Beckingham and Thomas Besant.
During the next few years various sums were raised, at Anniversary Teas, and other special occasions, so that in 1897 a new harmonium was acquired.
At the Chapel Anniversary in 1899 the sum of £3.14s.0d was raised, so that the ventilation of the building could be improved.
The actual work was not carried out for some considerable time.

This brings us to 1900, and the Fiftieth Anniversary, but unfortunately my information about this event, and subsequent history until more recent days has been only verbal.
What took place on this occasion I am unable to say, apart from the fact that the Choir from Whitechurch joined the celebrations.
The thrill of the latter event still remains in the mind of the oldest member, Miss Jane Wilcox.
The same lady also remembers the preaching of one of the original Trustees, namely Levi Riggs, who was also a Circuit Steward.
From what she tells me his preaching carried great conviction.
The indebtedness of the Circuit to this man is noted in John S. Simon's book "Methodism in Dorset".

In 1935 a generous gift of £100 was made to the trust by Mr Frank Hoare.
After five pounds had been deducted from this sum the rest was invested in the name of the Chapel.

When the trust met in February 1939 it was reported that in order to keep the premises in a good state of repair certain interior and exterior renovations were necessary.
This work was carried out at a cost of £50.
Further interior alterations were effected in 1944 because it was felt that the light in the pulpit could be improved.
The original rostrum was removed, and a pulpit then constructed in the right-hand corner near the window. The expense incurred for this was £2.10s.
About the same time a communion rail was made to replace the rostrum.
The actual expense for this is not mentioned.

It is of interest to note, in view of the original cost already mentioned, that the Chapel is at present valued at £800. The Trust was again renewed in 1948 when it was realised that only three Trustees were still living. Mr Robert Thorne, Mr James Vine and Mr Cecil W. Hayes.

The Sunday School since the beginning of this Century has been indebted to the faithful service of Mrs Rolls with the assistance of Mrs Burden and Miss Wilcox.
Mrs Burden succeeded Miss Rolls and she in turn was followed by Miss Wilcox.
This brings us up to a few years before the last war.
The work was continued for some time, but owing to ill health, the Superintendent very reluctantly had to resign, and in the absence of a successor the School was closed.
So we come to our Centenary, finding that our Chapel premises have served us well, and there is every reason to expect many more years of fellowship within its walls.


In connection with the above Centenary, services were held on Sunday 12 November 1950 at 3.00pm and 6.00pm, and on Wednesday 15 November, 1950 at 7.00pm. On Sunday the special preachers were at 3.00pm. Mr J.I. Miller of Poole, and at 6.00pm Rev Wilfred E. Curry, Superintendent Minister.
On Wednesday evening the Chairman was Mr L.H.Gray of Milborne St Andrew, and the speakers Rev A. Gordon James and Rev F. Balch, former ministers of this circuit.

On 19th November 1966, the first ever marriage service took place there, after the building had been licensed for weddings in that year.