a village which shows what

a new buzzword is all about 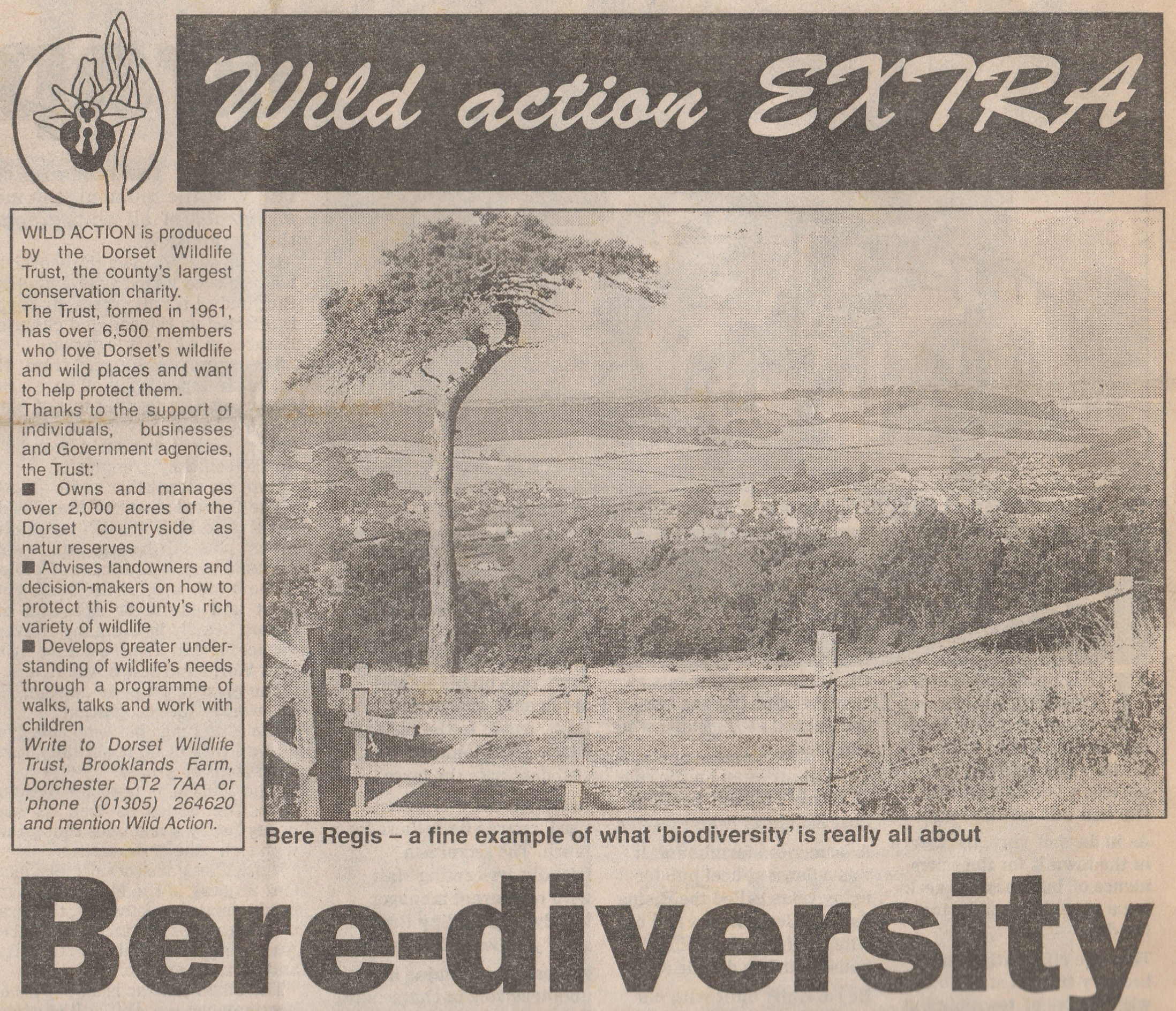 If you had to name a location in Dorset that could, at this time of year, enable you to encounter nine of the top 36 bird species most at risk in the UK, where would you choose?

Or maybe a site benefiting from all sorts of statutory protection?

Possibly one might fit the bill, but the unlikely spot of Bere Regis and its surrounding countryside is as likely to come up trumps as anywhere else.

But why should we be interested in these nine types of bird, listed in Birds of Conservation concern in the UK?

And what makes Bere Regis special?

To answer the first part of the question, we should be very concerned about the nine species at risk, because they include birds such as skylarks and song thrushes.

If 'common' birds like this have more than halved in numbers in just 25 years, not only they, but species they feed on and which prey on them are under threat too.

In short the 'biodiversity' of the land around us is in danger of becoming increasingly well used.

Like 'environment' 'ecology' 'habitat' and 'conservation', it is one of those terms which seems designed to baffle the lay-person but in fact biodiversity is easy to explain - it is quite simply the variety of life around us.

And biodiversity is just as much about protecting the wildlife on our doorsteps here in Dorset and Hampshire as it is about saving exotic species.

Which brings us back to Bere Regis.

Once the meeting point for the A35 and A31, Bere Regis is now by-passed and easily over-looked on the way to Devon.

It is a bustling settlement, with shops, pubs, a post office and school.

It could be one of 100 Dorset villages.

But look further and you will find that a lucky coincidence of a rich mixture of habitats and careful management of these areas by landowners, now shows what biodiversity can be about on a local level.

A quick tour of the area, all within a mile of the village centre, highlights the key habitats, the birds to be found, the threats they face and what you can do to help those that come into your garden.

North of Bere Regis, much of the land is arable, farmed on freely draining chalk.

No fewer than five of the species at risk can be found here.

Quail is the most unusual,a tiny gamebird which rarely pops out from the cover of growing crops.

It rubs shoulders with grey partridge,once one of our most common gamebirds,but now seriously in decline

due to changes in farming practises.

For them, there is hope of an upturn whilst 'set aside' is around, which similarly could help seed feeders such as linnets and corn buntings and insect eaters such as skylarks.

But a change in grant schemes may be all it takes to either help these speicies back on the road to recovery, or to continue their decline.

Show you care for these birds by writing to your MP asking for more 'agri-cash' to go into conservation measures.

Just a small shift in emphasis in the Common Agricultural Policy could make so much difference for wildlife.

The thick hedges, small fields and patchy woodland to the east of Bere Regis bring not only carpets of bluebells

in the Spring and the joy of walking along sunken tracks used for centuries by travellers, but the chance to

encounter two of the other species at risk.

What is particularly sad about these two birds is that they were once found in so many gardens.

You can help with their protection by making your garden more 'wildlife friendly'.

Bullfinches like thick hedges, blossoms and fruit (so they're not always popular with gardeners), while song

thrushes are real plantsmen's friends, desposing of slugs and snails.

But evidence shows that slug poison and thrushes do not go together.

Let nature's predators do the trick!

The last habitat to hold birds at risk is Bere Regis' own block of heathland called Black Hill.

On hot summer nights you can stand in the village and hear nightjars calling from the hill, or walk up in the day and be greeted by the harsh warning call of the Dartford Warbler.

Both species are being helped by the RSPB Heathland Team and English Nature on Black Hill, where

This success story is continuing elsewhere in the county, because development is being more strictly

controlled on what remains of this area's once extensive heathland.

You can help the heaths by visiting them, getting to appreciate their beauty and by avoiding fires at all costs.

So nine threatened birds find safety in an unexpected location.

The list is even longer when the Sand Martin colony is added, the cress beds which play host to Green Sandpipers and Water Pipits in Winter, and the lovely Bere stream which flows by a flower rich meadow in the heart of the village.

Bere Regis is an ordinary village.

Your area may be just as rich in wildlife.

Biodiversity is here around us, not a theory dreamt up by scientist.

But without positive action this wildlife heritage is at risk.

Thanks go to Paul Bennett for the loan of the Newspaper and to my wife Julie for copying the text for me!